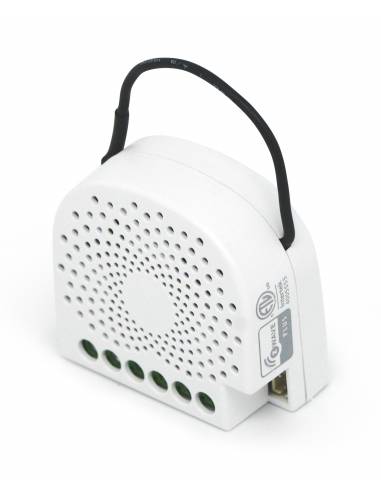 With the AEOTEC Nano Dimmer switchable and dimmable electric installations such as lighting or ceiling fans can be integrated into a Z-Wave network. Thus, the connected load can be switched and dimmed both wirelessly via Z-Wave and locally via an existing wall switch. The AEOTEC Nano Dimmer adjusts oneself to the connected lighting automatically and is therewith useable with various lighting kind of lighting (LED, Dimmable LED, CFL, Fluorescent, Incandescent, Halogen). Combined with an appropriate Bypass, it can even dim low power LEDs and CFLs that use less than 20 watts.  The compact radio module (60% smaller than its predecessor Micro Dimmer) is placed in a wall box right behind the normal switch. The switch is no longer directly connected to the load but acts as an input device for the AEOTEC insert that is controlling the load. The switch only sends a control signal to the insert which controls the load then again. The solution works with all switch design. You can use a momentary or a toggle switch. It’s recommended to use wall boxes with a 65mm depth. But smaller boxes with only 45mm depth can be used also if there is enough space behind the switch. The available space depends on the size of the traditional switch, the dimensions of the wall box and the amount of additional cabling placed in this box.

No reviews
Tap to zoom

Save products on your wishlist to buy them later or share with your friends.

No account? Create one here
Product added to wishlist